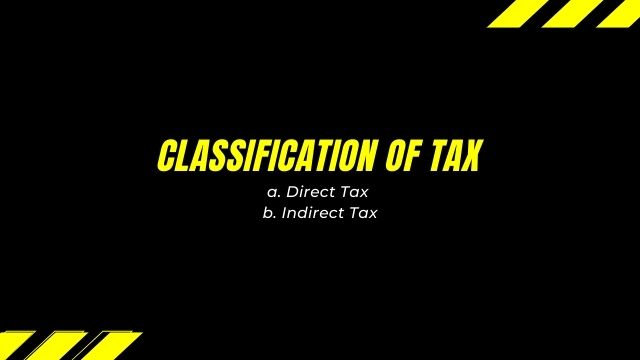 Modern tax system comprises of different types of taxes. Proper classification of the taxes is essential to understand the nature and significance of different taxes. Usually, taxes are classified on the basis of form, nature, aim and methods of taxation. A commonly applied classification of taxes is into direct and indirect taxes. This classification is based on the shifting of the burden of tax.
a. Direct tax
a direct tax is a form of tax paid by a person on whom it is legally imposed. It is collected directly by the government from the person who bears the tax burden. Taxpayers need to file tax returns directly to the government. Therefore, direct tax cannot be shifted. The impact or the money burden and the incidence are on the one and the same person. In other words, the same person pays and bears the tax burden. It is the tax on income and property. Examples includes income tax, property tax, vehicle tax, interest tax, expenditure tax, death tax, gift tax, etc.
the following are the advantages of direct tax:
The following are the disadvantages of direct tax:

an indirect tax is a form of tax imposed on one person but partly or wholly paid by another. It is collected by mediators who transfer the taxes to the government and also perform functions associated with filing tax returns. Hence, indirect tax can be shifted. In indirect tax, the impact and incidence of tax are on different persons. In other words, the person paying and bearing the tax is different. It is the tax on consumption or expenditure. Examples include VAT, excise duty, import and export duty, etc.
the following are the advantages of indirect tax:
The following are the disadvantages of indirect tax: