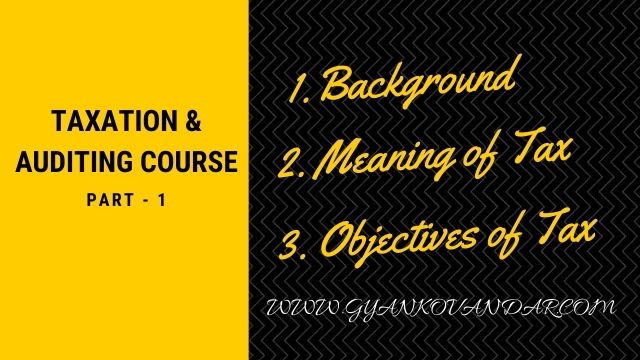 The government of a country is responsible towards the nation and the people. For this, the government undertakes various activities for the betterment of its people. Keeping their interests at the focal point, the government performs various developmental works, generates employment opportunities, handles day-to-day administration, maintains peace and security and launches other public welfare activities. These activities cannot be executed without adequate resources. Therefore, the government requires to mobilize sufficient resources for the proper execution of nation’s economic development plans.
The government mobilizes the resources through different sources; mainly from debt and revenue. The debt may be internal and eternal. The revenue of the government comes from two sources tax and non-tax. Income tax, property tax, values added tax, excise duties, customs duties, etc. fall under the head of tax revenue. The revenue like gifts, grants, revenue from public enterprises, administrative revenues such as registration fees, fines and penalties fall under the head of non-tax revenue. Among the different sources of revenues in Nepal, taxation is the most important sources, typically accounting for 80% or more.

The word ‘tax’ is derived from the latin word ‘taxare’ meaning to estimate. It is a type of levy or financial charge or fee imposed by a government on legal entities or individuals. It is a compulsory payment from individuals, households and firms to the government. It is a kind or money of which it is the legal duty of every citizen of the country to pay honestly. It may be levied on income, property and activity. Tax is computed and paid as prescribed in the law. If a person defies the tax payment, he may be punished in the court of law. Hence, tax is not a voluntary payment or donation, but an enforced contribution, imposed by government. A taxpayer is not entitled to compel the government, while paying taxes, to give something to himin return of the amount he has paid. Taxation can be considered as a convenient method of raising revenue which in turn is linked with the welfare of the people directly or indirectly.
The organization for economic cooperation and development- OECD defined the term “taxes” as confined to compulsory, unrequited payments to general government. Taxes are unrequited in the sense that benefits provided by government to taxpayers are not normally in proportion to their payments.
According to Hugh Dalton, “a tax is a compulsory contribution imposed by a public authority, irrespective of the exact amount of service rendered to the taxpayer in return, and not imposed as penalty for any legal offence.”
Prof. Edwin RA Seligman defined tax as “a compulsory contribution to public authorities to meet the general expenses of the government which have been incurred for the public good and without reference to special benefits.”
According to Prof. Carl Copping Plehn, “Taxes are general contribution of wealth levied upon persons, natural or corporate to defray expenses incurred in conferring common benefits upon residents of states.”
In a nutshell, the key features of tax can be outlined as below:

The primary objective of taxation is to generate revenues to pay for the expenditures of government at all levels. Because public expenditures tend to grow at least as fast as the national income, taxes, as the main vehicle of government finance, should produce revenues that grow correspondingly. Besides raising revenues, tax has become an instrument of social and economic policy for the government. The main objectives of taxation are:
a) To Raise Revenues
the fundamental objective of taxation is to finance government expenditure. The government requires carrying out various development and welfare activities in the country. For this, it needs a huge amount of resources. The government collects resources by imposing taxes. So, raising more and more revenues to meet the ever increasing government expenditure has become an important objective of taxation.
b) To Regulate the Economy
the government not only raises public revenue through taxation but also imposes restrictions on the use of certain goods. The government can impose excise duty on tobacco, liquor, etc. to restrict the consumption of harmful goods. The government also raises revenues through import and export duties but their specific objectives are otherwise. Import duties are levied to restrict imports of those goods which may harm the local industries and therefore help the country’s international balance of payments and protect industries from overseas competition. Export duties may be levied to restrict the export of those goods which are required within the country. Similarly, taxes can correct for externalities and other forms of market failure (such as monopoly). In this way, the government regulates the economy in accordance with the needs of the country.
c) To Prevent Concentration of Wealth
tax is imposed on persons according to their income level. High earners are imposed high tax through progressive tax system. It prevents wealth from being concentrated in a few hands of the rich and hence narrows down the gap between the rich and the poor.
d) To Redistributing wealth for the common good
tax collected by the government is spent for carrying out various welfare activities. In this way, the wealth of the rich is redistributed to the whole community. Tax helps in redistributing wealth in the country.
e) To Boost up the economy
tax serves as an instrument for promoting economic growth, stability and efficiency. The government controls or expands the economic activities of the country by providing various concessions, rebates and other facilities. Low rate of taxation during a business depression will accelerate more income to the people and help in raising demand and thus revive business activity. On the contrary, high rates of taxes may be useful to check inflationary pressure on prices. Tax policy may be used as a regulatory mechanics to achieve price stability, check business booms and depression.
f) To Reduce Unemployment problem
the government can reduce the unemployment problem in the country by promoting various employment generating activities. Industries established in remote parts or industries providing more employment are given more facilities. As a result, the unemployment problem can be reduced to a great extent through liberal tax policy.
g) To Remove Regional Disparties
regional disparity has become a chronic problem to the developing countries like Nepal. Tax is one of the ways through which regional disparities can be minimized. The government provides tax exemptions or concessions for industries established or activities carried out in backward areas. This will help increase economic activities in those areas and ultimately regional disparity reduces to minimum.