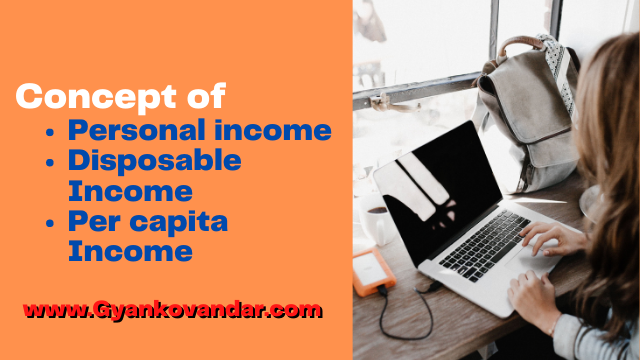 The total income received by all individuals and households of a country from all possible sources before payment of direct taxes during a year is called personal income. In other words, it is the sum of all incomes actually received by individuals and households of a country during a year. It is never equal to the national income because the factors of production do not get all part of the income they earn. For example, corporate income tax or corporate profit tax should be paid to the government from corporate profit. This is not available to the shareholders. Similarly, some part of corporate profit is not distributed to the shareholders, which is known as the undistributed profit. Social security contributions such as provident funds, pension funds, etc., are deducted from the wages and salaries. On the other hand, transfer payments in the form of unemployment benefits, old-age pension, etc. are the income received but not earned.
The various sources of personal income are labor income, proprietor’s income, rental income, interest income, and transfer payments after payment of social security taxes. In other words, it includes income received by households and incorporated business sectors (sole proprietor and partnership businesses), inclusive of transfer payments.

The per capita income concept enables us to know the average income and living standard of the people. But it is not very reliable, because in every country due to unequal distribution of national income, a major part of it goes to the richer sections of the society, and thus income received by common people is lower than the per capita income.