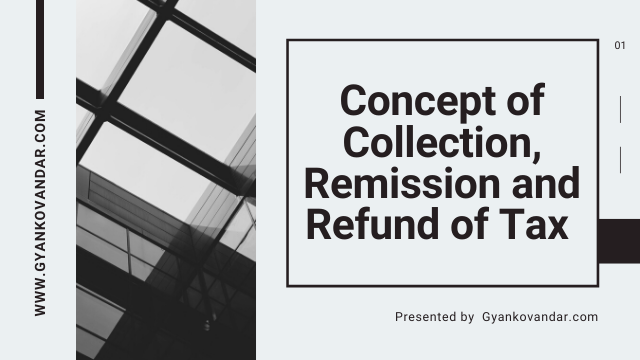 Concept of collection, Remission and refund of tax

Taxes are the life-blood of government and their prompt and certain availability are necessary to fund government expenditures. The government collects taxes through different methods. A large portion of tax revenues is paid by the taxpayers voluntarily through self-assessment, installment, and withholding methods. However, not all taxpayers assess their taxes, file their returns, and pay taxes within the specified time. Generally, the government loses taxes due to unpaid taxes due or tax gap due to lapses in tax laws resulting in tax avoidance and the economic inefficiencies caused by tax evasion. For example, the taxpayers may evade taxes by not coming into the tax bracket, not filing the correct returns, not paying installment taxes or taxes assessed by tax officials, or not withholding taxes at sources.
The tax office may need to follow up continuously on non-filers and non-payers for collecting taxes. The understanding of the non-compliant behavior of taxpayers may also be essential to adopt an appropriate method of recovering such taxes. Hence, the collection of tax refers to the automatic collection as well as recovery from defaulters. Collecting taxes is not cost-free. It usually generates two types of costs: efficiency costs and operating costs. Efficiency costs refer to costs arising from distortions in the allocation of resources owing to the imposition of the tax, while operating costs refer to both administration costs, which are the costs to the government of collecting revenue; and compliance costs, which are the costs (both monetary and non-monetary) incurred by taxpayers in meeting their tax obligations. The government should devise and adopt a suitable method which is effective as well as cost-efficient.

Tax remission is simply the cancellation of or discharge or release from a tax, interest, or penalty. In tax remission, taxes and other related obligations are legally waived and are no longer payable. The tax laws allow remitting taxes in some very limited circumstances. Basically, taxes are remitted on the following two grounds:
1. reasonable cause – Tax officials may remit tax (or interest or penalty) if the reason for late filing, non-electronic filing, or late payment was beyond the control of taxpayers. This means that it must be “reasonable” for an average person in the same position not to have complied.
2. Collecting the highest net revenue – sometimes the government may remit in whole or in part any interest and penalty to recover taxes due from defaulters. Once the defaulters are brought into the tax net, voluntary compliance will be encouraged for the subsequent periods.

A tax refund refers to a refund on taxes when the tax liability is less than the taxes paid. It is the return of excess amounts of income tax that a taxpayer has paid to the government. Taxpayers can often get a tax refund on their income tax if the tax they owe is less than the sum of the total amount of the withholding taxes and estimated taxes that they paid. In certain cases, taxpayers may even receive a refund if they owed no taxes because certain tax credits are fully refundable.