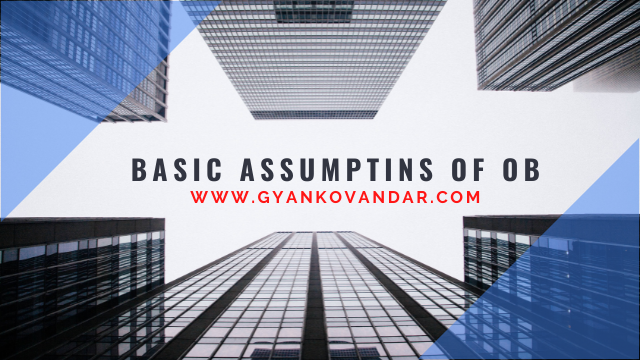 The subject or field of OB is based on certain fundamental concepts or assumptions. Not only that, every field of social science (or even physical science) has a philosophical foundation of basic concepts (assumptions) that guide its development. In accounting, for example, a fundamental concept is that ‘for every debit, there will be a credit. In physics, a basic philosophy is that elements of nature are uniform. But the same cannot be said for people. OB has certain basic assumptions revolving around the nature of people and the nature of organizations.

A. The Nature of People

Social scientists have derived certain assumptions regarding the nature of people. After going through a long research and study process psychologists have come to the conclusion that there are certain aspects about the nature of people. They can be said as basic assumptions about the human being. They are also regarded as the nature of people. In this category, there are four basic assumptions:
1. Individual differences:
Though people have a lot of things in common the differences are much more than similarities. Individuals differ in physical characteristics, intelligence, aptitudes, attitudes, personality, skills and so on. The idea of individual differences comes originally from psychology. Thus, from the day of birth, each person is unique, and individual experiences after birth make people even more different.
Managers need to consider these differences because they affect the job behaviours of employees. Therefore, every person should be selected, trained and treated on the basis of the kind of person he is. The style of leadership and supervision and the type of motivation provided must satisfy the individuals if their maximum cooperation is to be attained.

This concept signifies that the behaviour of a person at work can’t be taken in isolation. When an employee comes to the work station as a complete person, s/he has his/her background, sentiments, emotions, feelings, etc. cannot be separated from the skills they are using on the job. Employees carry with them the problems of their private lives. Similarly, their home life is influenced by their work life. Therefore, the managers need to help an all-around development of the man rather than a particular aspect of a person.

According to psychologists, human behaviour is caused, motivated and goal-directed. It is the situation that stimulates a person to behave in a given manner. People’s behaviour is caused by needs that can be directed and controlled in order to get desired results. Therefore, managers need to motivate employees and determine what managerial action satisfies human needs and what actions threaten their need fulfilment.

4. Value of the person (human dignity):

B. The Nature of Organization

Not only people but organizations also have certain basic characteristics. They are regarded as the nature of the organization. This category contains two basic assumptions about an organization.

Conclusion: When the six fundamental concepts of OB are considered together, they provide a holistic concept of the subject “OB”. Holistic organizational behaviour interprets people organization relationships in terms of the whole person, whole group, whole organization, and whole social system. Hence, issues are analyzed in terms of the total situation affecting them rather than in terms of an isolated event or problem.